William and Lucy Clifford are buried together in Highgate Cemetery near to Karl Marx's tomb and close to George Eliot's who knew and loved them both. The gravestone bears these words:

Lucy chose the silver currents quotation from Shakespeare's King John and I chose to use those words for the title of my Clifford biography. 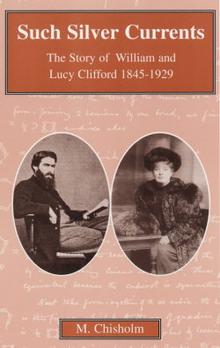 Such Silver CurrentsThe Story of William and Lucy Clifford 1845-1929

This is the first biography of the mathematical genius and his literary wife. The story of their lives, works and friendships reflects the intellectual excitement and the social structure of the age in which they lived. William Kingdon Clifford was a leading mathematician, philosopher and FRS. His Clifford Algebra is fundamental to Dirac's theory of the electron and is now increasingly significant in many areas of mathematics, physics and engineering. Regular Clifford Algebra conferences are held worldwideAfter William's early death Lucy Clifford became a successful novelist and playwright. She ran a Literary Salon at her home in London and had a very wide circle of friends who came from every sphere of life. She saved over one thousand letters from these famous friends and I was fortunate enough to be given full access to this treasure trove of previously unpublished material. Extracts from the collection of letters illuminate the book and open a new window on the era Thus the book provides an original and lively insight into an unexplored corner of Victorian and Edwardian intellectual life.Sir Michael Atiyah O.M. was kind enough to write the foreword to Such Silver Currents and a substantial Afterword and Reflection on William Clifford's Contribution to Mathematics is contributed by by Sir Roger Penrose O.M.Monty Chisholm is an Honorary Research Associate in Humanities at the University of Kent.With Professor Marysa Demoor, she has edited annotated and published the letters from Henry James to Lucy Clifford titled Bravest of women and finest of friends : Henry James's Letters to Lucy Clifford.English Literary Studies. University of Victoria 1999monty@chisholm.ch or write to 27 Moat Sole, Sandwich, CT13 9AU.

William Kingdon Clifford, Born May 4th 1845 Died March 3rd 1879I was not and was conceived: I loved and did a little work. I am not and grieve not.And Lucy his wife who died on April 21st 1929.Oh, two such silver currents when they join do glorify the banks that bound them in.