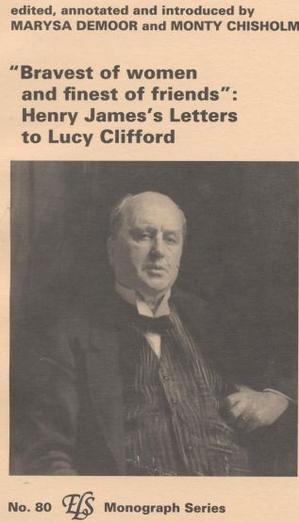 Published 1999 in the English Literary Studies seriesUniversity of Victoria Press.

Although I had known of William Clifford through my husband's long involvement with the applications of Clifford Algebras it was not until in 1997, when reading Leon Edel's Life of Henry James, that I became interested in William's wife Lucy and began my research. When Henry James died in 1916 Lucy Clifford along with two of Henry's young friends, Jocelyn Persse and Hugh Walpole, received legacies of £100. They were the only people outside his family to be remembered in this way. In 1998 I was fortunate enough to trace typescripts of some seventy of Henry James's letters to Lucy in the Houghton Collection at Harvard. Only eleven of them had been previously published. Professor Marysa Demoor and I edited, annotated and published the full collection with the University of Victoria Press in 1999 as part of their English Literary Studies Series. The book is titled ' "Bravest of women and finest of friends": Henry James's Letters to Lucy Clifford'Biographical details about Lucy are thin on the ground. She was secretive - even devious - about events in her early life. However, letters are often as revealing of the personality of the recipient as of the writer and this was certainly the case with Henry James's letters to Lucy - as we read his letters we learn about her and it becomes clear that Lucy held a very special place indeed in Henry James's affections.In her review of the book for Victorian Periodicals Review, Mary Elizabeth Leighton of The University of Alberta wrote 'One can only regret that Henry James burned his papers before his death. 'If Lucy Clifford was half as lively as his remarks to her and the introduction to the book suggest, her letters would have been a rare pleasure indeed.'Leighton notes that, above all, James appreciated Clifford's 'generous sympathy' for his work, and he in turn offered her criticism, both generous and severe, of her own writing. The intimacy of their friendship is manifest in his moving letters about the death of his brother William and about the declaration of war in 1914.The letters also demonstrate the trust that he had in Lucy' discretion since he would sometimes express quite scandalous criticisms of mutual acquaintances and beg her to burn these letters immediately after reading them. Importantly the letters reveal how much James treasured the closeness of their friendship.Sadly, few of Lucy's letters to him remain: they probably went up in smoke in his regular burnings of personal correspondence in the fireplace and garden at Lamb House.In most of his letters he addressed her as 'Dearest Lucy C' or 'Dearest Lucy' but used 'Good and Only Aunt'; 'Dearest Creature'; and 'Beloved Girl' too. Almost every letter is closed differently - 'your all faithful and fond'; 'yours re-boundingly'; 'evvy your Nevvy'; 'your ever so affectionate'; 'your doting old Nevvy'; 'constantly yours'; 'your most adhesive and devoted'; 'your ever clinging'; 'your constant old Nevvy'; 'tender and true'; 'all increasingly'; 'seedy and stumbling but not quite crumbling' Henry James. Just one letter ended up with a frivolous 'ever your Lambkin'!Henry James was only three years older than Lucy but the teasing 'Aunt' and 'Nevvy' epithets came about in 1892 when Lucy published Aunt Anne, which was considered to be one of her best novels.The Henry James letters to Lucy span the years 1892-1914 and are rich in detail about the literary and theatrical scene of the period.